How do you get the bad ending because I can't seem to unlock it (unless it's literally just not to pay Mr. Polo)? Also, I noticed every time you use an item from the Ursula shop, you use up two items but the effects is only if you use one item. I'm not sure if this applies to every item though.

Hello, Berrys. You're right. To get the bad ending you can't have the money to pay Mr. Polos. Regarding the items, it's just the ones from Ursula's shop since they are customized by me. The other ones like HP and MP potions are working properly.

Bought the game, but I'm a little unsure on how to actually install and use it. I looked through, got WinRAR, and it still didn't work. Any tips?

Edit: Fixed all my problems! It was all on my end. Can't wait to play the game.

Hello, thank you for your support! If you have any questions, feel free to share it with me!

omg! Can you tell me your game version? Is it the demo or the launched one?

can you join discord or send me a printscreen?

do you remember your last steps? did you go on a hunt or slept to recover stamina?

I couldn't find any bug during this specific scene. Are you waiting at least 2 seconds before closing the game? The 'black scene'  is a part of this cut-scene. Can you send your save folder to maledollstudio@gmail.com? I'll check your save file.

Guys, I've uploaded a new version. Can you test this new one (1.00b)? Maybe your save file will not work.

I'm having th same problem. I played the launched version on day 14 I upgraded the cleaner then prepared dish 2 then worked on Francis 3. Then on  Kyle's turn, he walked out of the inn, to the tower, complained about being bored, then said something or other "idiot" and the screen went black except for his picture and the music is still playing but the game is completely frozen. :(

I couldn't find any bug during this specific scene. Are you guys waiting at least 2 seconds before closing the game? The 'black scene'  is a part of this cut-scene. Can you send me your save folder to maledollstudio@gmail.com? I'll check your save file.

Question: would you consider making "no defeat conditions" an option? I understand it undermines the gameplay in many ways, but think of this as an easy mode for people who want to follow the story and the CGs and aren't that good at JRPG and management.

Hello, thank you for your patience and feedback. I think this is an interesting idea, and I hope to work on it before the launching version! I haven’t given much thought about this.

You mean you'll consider it? Thats amazing! Btw, I really like the idea of the game, and I love that you went with an uncommon design such as a spiderboy for a protagonist.

I'm finishing the game and I'll try to implement this possibility! Thank you!

Hey there it does not allow me to download on PC saying this is not an archive cant open files.

do you have winrar?

Ok so I downloaded it and used it and it worked thank you, and I can't wait for the mobile version.

yes! the file is WinRAR file, download it and try again :)

Will, there be an android version soon this game looks amazing

Thank you! This game will be only for PC. Next year I'll start working on mobile games. :)

Since you said to report bugs, I think I ran into one when I tried to do the second job at the bar. Unless I'm missing something, I have less than 81 trust, more than 310 desire, more than 15 stamina, and it is WED. Pictures below. Please tell me if I just missed a minor detail.

Additionally, maybe a bug or maybe a feature. some monsters would travel beyond walls when they randomly move in the noncombat areas. Unfortunately didn't take a picture when it happened. May break some peoples immersion, but personally, I'm ok with it since it means less monsters to  deal with at bad times.

Your game is great fun, and I'm sure the full version will be more exciting. Kinda wish I could run to the shop to get garlic and then return to the Inn AND get the cook to make a dish. Additionally, though nothing happened when I left during the day with Bruce, I hope one of them ends up being the orcs from Kyles trip to the tower come looking for him, as Kyle mentions his hotel during the first job with the orc. Again love your game. 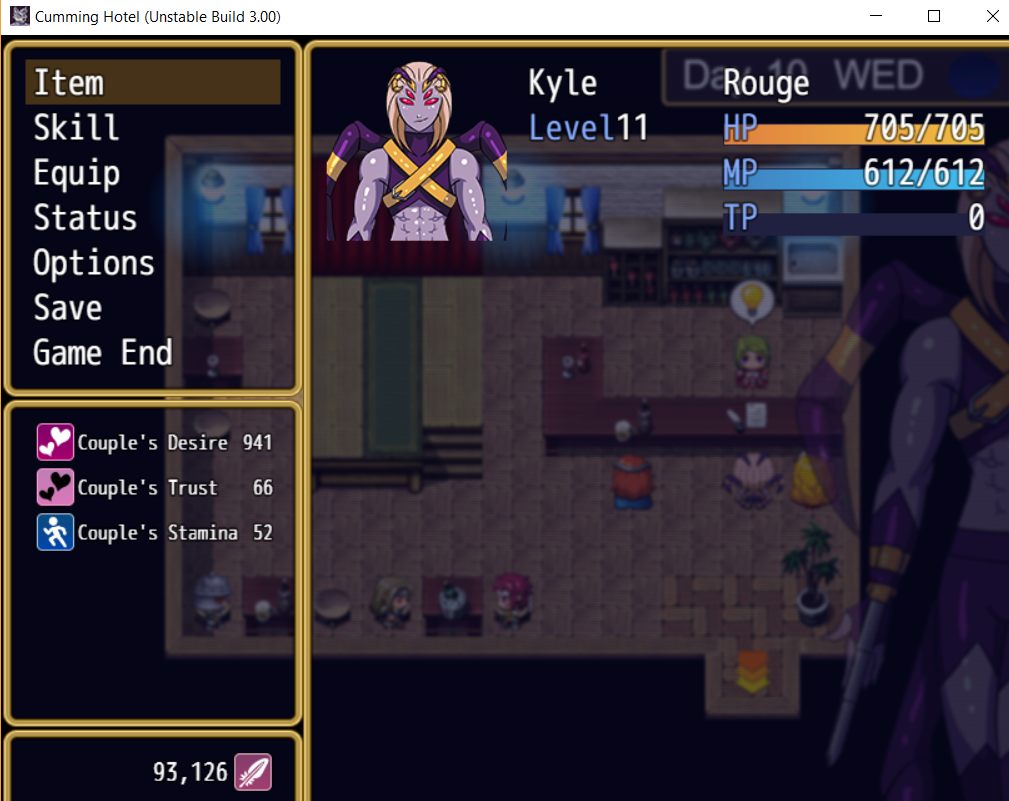 Thank you for the feedback! It’s been really helpful to improve the game. Regarding this possible bug, I'll make sure to check it. I had similar problems during the closed test, but I thought it was fixed. Can you join in Male Doll's Discord or send your save file to maledollstudio@gmail.com? Concerning to leaving the Hotel during the day with Bruce, you got lucky because 3 events may occur (one good, one bad and one neutral). As for Kyle, Bruce, and Orcs, they will have a SPECIAL moment! Be prepared :>

How can I see the the second part of  Orc massage scene?

Hello, Juan. Thank you for your patience. To watch the second part of the 'Orc Massage Scene', you need to have the minimum requirements. You can check this information by talking to Brimon after you unlock the first scene or you can check it below. [Stamina 7, Desire more or equal 310, Trust less or equal 89] 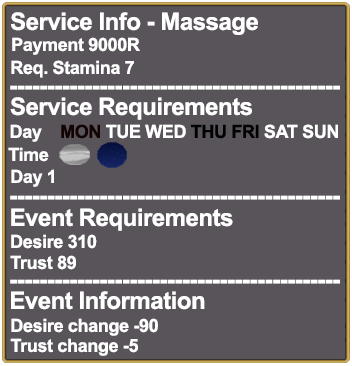 You have a very nice game here, but a couple of things.

1. WAAAAY too much information at the start. You might want to think about starting the daring duo off at the inn and then drip feed information to players as they explore the town at will. This way they aren't bombarded with line after line after line. of text, of which most doesn't really matter. Like Saint Cer? I assume that's the deity of the world?! That can be  found out by talking to an NPC, maybe even doing a quest to find a lost necklace bearing this saint's image and getting backstory on it.

1a - Also, you may want to explain or show some backstory on the pair so the players feel attached to them. This could be done in a number of ways, but an easy way is to show their lives before they got together in 'flashback' scenes.

My favorite game does this several times.

2. Tone down the orc enemies. A good rule of thumb is that you should be able to defeat most enemies in about 3-4 shots of your regular weapon strikes. I was using the spider guy's special skill and still couldn't one shot them. So this made fights more of a drag than a joy.

3. You may want to create other items for the players to find in the dungeons, because all I found was vegetables and if I could buy them then there was no point to searching for them.

4. EXPAND THE DUNGEONS!! Narrow corners are fine when you don't have visible enemies on the screen, but with visible ones it becomes more of a chore to move around them.

5. Not sure about this since I could only get to level 5, but are you going to have a boss monster on every 10th floor? If so, then that's fine, but if you aren't then you should have some kind of barrier every 5 floors to make it so that the play has something to engage with, because after the first few fights I blew through the dungeon just to see what else was ahead.

6. Personal note: Let the Wolf go into the dungeon. I want to fight as the pupper! <3

7. You've got very good designs for the town, though some of the animals don't make sounds, like the horse during and such. Not sure if that was by choice or not, but just thought you should know.

8. More varied enemies. I know you just started, but perhaps mix it up with three enemy types. Orcs - Bats - Spirits, that way the players have some variety to fight against.

9. Lower the player level and give them a chance to build up the wolf/spider guy's strength, that way they feel attached to them.

10. More varied skillz, please. Since the spider guy seems like a rogue/assassin, probably give him skills to weaken enemy stats and inflict status ailments and darkness based spells. While giving the wolf guy buffing and healing and holy skills, that way the dichotomy between them can be more varies.

11. Ultimate skills - If you're going for 100TP then you should make sure that this skill can do extreme damage because most fights ended before I could get them to this number.

11a. Perhaps give both of them Super + Extreme skills at around 30 - 60TP respectively, this way you can show off their personalities through these skills. I.e - Spider Guy - Ravenous Web (A Super Skill which stuns on enemy and drains HP) Dead Man's Touch (An Extreme Skill which does x3 damage but has a high chance to kill none boss enemies)

You're doing a great job over all. The music and feel is great. Keep it up!

THANK YOU SOOOOOOOOOOOOOO MUCH FOR THIS AMAZING FEEDBACK, KDM. I'll start to work on it right now! Also, I appreciate that because I'm a solo developer, and there are some things that escape me while I'm developing and managing the whole project. I hope in the next version some of your suggestions will be implemented. Thank you for your patience [I was on a trip].

If you want some help + guide then I can give you my discord.

I'm working on my own games, so I know that an extra brain can help with the creativity!

I'll be glad if you can send me your Discord! Also, I've already played Broken Chains, and I'm looking forward to updates! It's a lovely game =]

Any plans for an android version?

For this one specific, I don't think so. But I hope to have some news soon!

please finish this game. please. i love. how do drink pinga